The Buzz Bee Cyclonic is a full-auto dart blaster compatible with Nerf darts and magazines. The name comes from the large spinning minigun-esque barrels on the front. Those only hinder performance and were the first things I ripped off XD . The stock motors run off the same 4 AA batteries as a Nerf Stryfe or similar. Either there’s a hotter wind or significantly lighter flywheels as rev time is much more playable. Cycle control is lacking for mechanical reasons (as we’ll see) and performance with darts with compressible heads (most Nerf compatible darts) is ehh. This is because Buzz Bee designed their cage’s crush distance for Buzz Bee Gray/Green suction darts which have a nearly incompressible plastic head behind the suction cup.

Here are the photos I took up to the point where I started making modifications (other than immediately removing the spinning barrels). The modifications I will document in another post. Below, I will critique the mechanisms and design choices as I understand them. 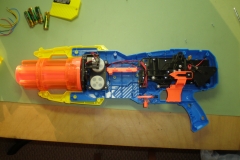 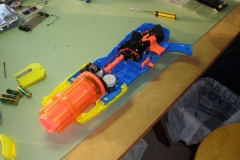 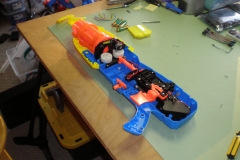 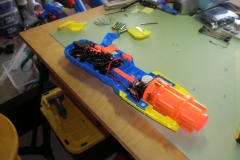 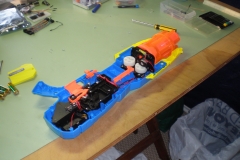 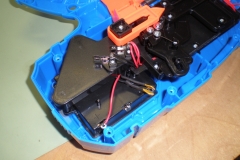 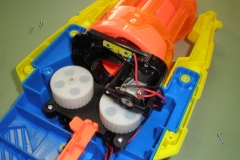 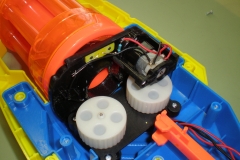 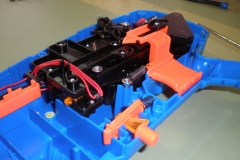 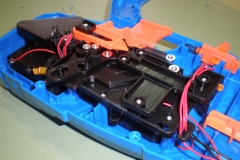 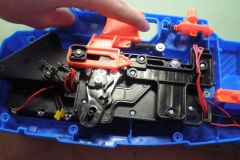 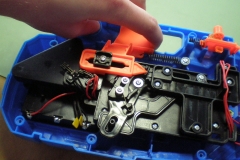 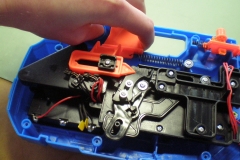 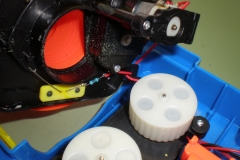 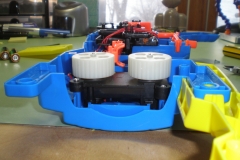 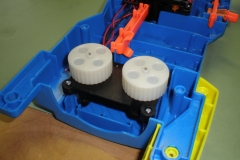 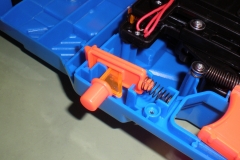 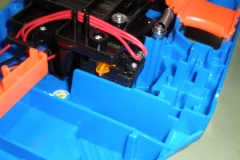 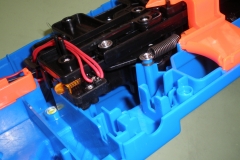 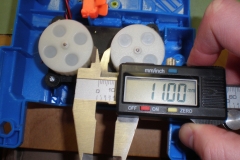 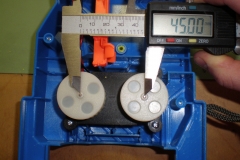 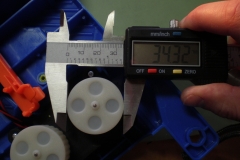 Buzz Bee chose to bring forward a sketchy full auto mechanism from an earlier blaster in their line up, the Auto Tek 20. The first thing I noticed upon trying to fire the blaster was the long heavy trigger pull before the motors started to rev. I’m assuming that nerf patents their pusher mechanisms – so Buzz Bee ends up coming with creative (and cheaper?) solutions.

In this case, the basic pusher mechanism is still reciprocating, however instead of worrying about any actual cycle control, the forward motion of the trigger physically disengages the push rod from the reciprocating mechanism and retracts it back away from the mag. Pulling the trigger reengages the mechanism and returns the push rod to wherever it was before the trigger was released. This means that sometimes a dart is pushed into the flywheels as they’re spinning up because the push rod was half way out when the trigger released and retracted it. The trigger pull is so long and heavy because that much motion is required to retract a fully-extended push rod, and the spring in use is the amount of force it takes to do that.

Buzz Bee uses a dual-stage trigger instead of separate pusher and rev triggers as with modern Nerf blasters. This coupled with the complete lack of cycle control means that I often plan to fire two round bursts because the first dart may get pushed through the flywheels before they get to critical velocity.

Where as the rapidstrike may be developed into a precision full-auto blaster, I have learned to think of this blaster as a close assault weapon designed to lay down lots of darts at close range for cover or pushes. With a simple 2S lipo mod and rewire, it is highly effective at this.