Introduction
You know these kinds of suits?

These are pretty cool, but they’re not that easy to build. Also, those things are either always on or synchronized to music with timings (set by a computer). What I wanted was something I could trigger with gestures or some sort of touch sensor. Plus, I didn’t have EL wire (this stuff).

What I did have was a bunch of super bright LEDs, resistors, a few transistors, a spare microcontroller, dubious soldering skills, and a lot of patience. And so without further ado: 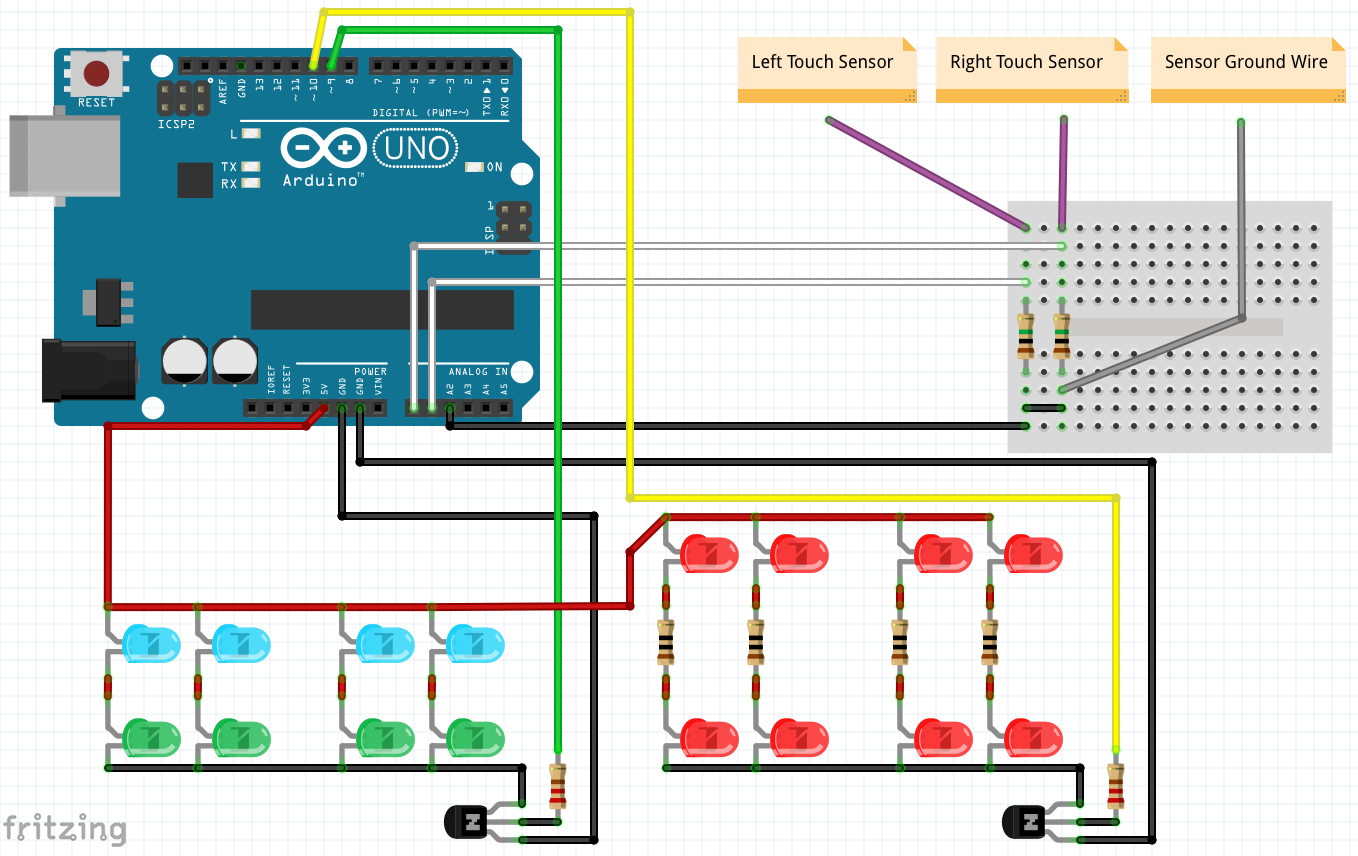 GlowV circuit – This is a zipped version of the original Fritzing file.

Note: The sensors in this project are very similar to the sensors in my Blink’n’Beat project. The only visible difference is that I wear the ground wire tucked inside my belt (anywhere not visible) instead of actively touching it with a finger.

Parts
(I’m listing the exact parts I used, obviously it can be done differently : )

Touch Sensor:
This touch sensor is inspired by the windowed resistor divider circuit in the Makey Makey. Alpesh Vitha designed a similar (though simpler) circuit and explained it in a youtube video which can be found here.

What this means is that if the total series voltage drop of the LED string is below the supply voltage (5V is this case) and their current is not manually limited, the string will draw an “infinite” amount of current for however long it takes the LEDs to burn up, which is only a fraction of a second.
So, what I did was calculate how many LEDs I could put in series to try and get the series voltage drop above the supply voltage which negates the need for a resistor. A blue and green LED in series equates to a minimum series drop of 6.4V, which is definitely over 5V. Putting 2 reds in series however is only 4V. The solution I used was to drop the additional volt with a resistor (10 ohm seemed to work). An alternative solution might have been to put an additional LED in series, getting the min series drop up to 6V.

Bug (sort of): Because of the way the blue and green LEDs are wired, whether it be transistor current limiting or series arrangement, when I turn on the red strings, the blues and greens get significantly dimmer. However, I actually find this to be useful, because I now have two brightness levels of the lights on my chest depending on whether I turn on the other lights. : D